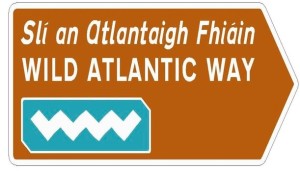 As if Ireland didn’t need another reason to attract visitors to this magical, historic and bucolic gem of an island, it has given the world one more reason to make that visit: the Wild Atlantic Way!

Stretching along 2500 kilometers of rugged Irish coastline, the Wild Way as it is popularly known, is identified by small but distinctive road signs displaying a green and white logo that dots the narrow roadway along the very western edge of the island.

The logo itself is a clever run-together of two connected Ws, side-by-side making a wavy line that both identifies the initials for the Wild Way. It also depicts the curvy road that zigzags along cliffs of the blue sea of the multi-peninsula coast. The branding doesn’t stop there. Every tourist office and website contains information on the many attractions along the route. Like North America’s famous ‘Route 66’, you are promised to get your kicks – Irish style.

The compelling marketing pitch got us! “Discover the real Ireland along Europe’s western edge!” We were smitten. After a hectic 5-day conference in Dublin, we were ready to get away from the population and see the real Ireland. The Wild Atlantic Way was just the ticket! But where should we go?

It Did Not Disappoint!

There were so many options and so little time. Would we skim over the top or dig deeply into one part of the Wild Way? We chose the latter, promising ourselves that we’d be back to immerse ourselves in yet another adventure along the scenic route another day.  We decided upon the National Geographic’s 2009 favorite destination, Dingle, in West County Kerry, coincidently where Michael’s grandmother was born. It didn’t disappoint, Dingle is a gem! Voted Ireland’s top food town by Blas Na H’eireann, Ireland’s top food critic organization, we were pleasantly surprised by the fresh, locally sourced, delicious meals from ordinary pubs to fine restaurants.

As much as the British tried to stomp out the ancient Irish heritage, it is alive and well all along the Wild Way. From castles to prehistoric ruins, you’ll see more than the breathtaking cliffs and pounding seas. You will hear one of the oldest written languages in Europe. Once forbidden under 200 years of occupation, now Gaelic is being taught to school children and spoken freely in village after charming village. The Wild Way is a brand for all that is Ireland, presented in a long and winding road of devastating natural beauty through a simpler and more sincere time when communities lived off the land and worked in harmony with nature.

The Irish tourism authorities are to be complimented for the way they branded and introduced the West Coast of Ireland. It is a relatively less traveled part of this tourist destination country. The brand promise is one of discovery and surprise, history and culture, and astounding natural beauty.

We believe brands are owned by their customers. We also believe that the brand image is the view and opinion customers hold about the product or service. If we are any sampling of the customers of Ireland’s Wild Atlantic Way brand, we have to give it two big toes up! This is our new favorite place in Europe. Check it out!

Look for our picture album of Ireland’s Wild Way coming soon at: www.thebarefootspirit.com