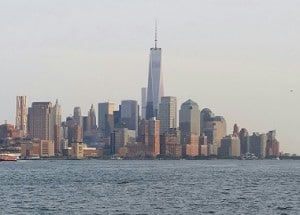 When we were in New York City last year the cupola antenna was being hoisted into place at the top of the new Freedom Tower in the newly rebuilt World Trade Center. As a huge crane gently positioned the last piece of the Tower’s stature in place, pictures of this physical and symbolic achievement were flashed around the world heralding this auspicious American icon.

The final touch on the exterior of the Freedom Tower represented far more than just the completion of another office building, or even the tallest skyscraper in the western hemisphere.  It represented the beginning of the healing process for an entire nation.

We followed all the news releases from the initial design competition showing multitudes of images of different alternatives until the final designs were selected. At first we were underwhelmed by the proposed design of the buildings. For us, they seemed just a shadow of the former Twin Towers. How could they possibly top those international landmarks – and with the Stature of Liberty looking on no less!

Sure, it’s commercial rental space but was this single tower design with its diminutive attendant buildings ever going to take the place of those two majestic towers? Admittedly, the designers were under a great deal of pressure to come up with a design that would honor the past and make a statement about the future.

Last week we returned to NYC, which is quite a brand in itself. We finally saw the Freedom Tower complete with its surrounding new buildings of lesser stature. But this time we saw it free of cranes and scaffolding, and in the context of all the other buildings that crown Lower Manhattan.  The design suddenly made sense!

Instead of a singular close-up newspaper image of just the Freedom Tower to compare with the former Twin Towers, we saw the whole finished picture in context from a distance. Wow! Clearly, the new Freedom Tower and surrounding buildings are all part of a brilliant design. They not only complement the existing skyline, but now they enhance and celebrate the pre-existing skyline in a classic way.

The Twin Towers were very impressive because of their size and location, and the fact that they were an identical pair, but the new design actually reconfigures the entire skyline of Lower Manhattan into a castle-like rise with the Freedom Tower plunging skyward up from the center. The classically sturdy and shining pyramid design continues the natural upward sweep from the waters of New York Harbor to the tops of all the surrounding buildings, culminating in an elegant and powerful spike in the sky.

When viewed from the New Jersey side, it’s absolutely stunning. It brings meaning to all the other buildings that were there before the reconstruction. In our humble opinion, it is a wonderful tribute to the inspired and resolute spirit of the American people, proving that we not only rebuild and recover but improve upon what was taken from us.

So yes, we are thrilled with the design of all the new buildings that surround the memorial. From the water it looks like a futuristic mythical city and isn’t that what it the Freedom Tower “brand” should do?

Bravo to a brand that will always mean more than an office tower and to the resilience for which it stands.