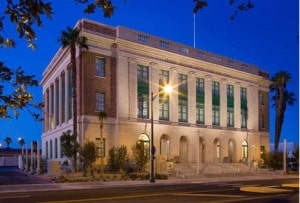 It’s ironic that the same former federal courthouse in downtown Las Vegas that was the site of hearings and criminal proceedings against so many mob members wound up being a tourist attraction in the very town that was, in large part, originally built up by the mob to become the gambling capital of the world.

You’d think that the legitimate Las Vegas of today would try to play down its sorted past, but they did just the opposite. They celebrated it! And why not? Tons of movies have already educated the general public on the roll the mob had in the development of Las Vegas gambling, so it’s no secret. You can see the entire history in the Mob Museum, and it is a must see on your next trip to “Sin City.”

The old courthouse building has been completely restored to its gray, gothic, serious 1930s feel. All the hallways, chambers, holding areas, and the courtroom itself have been painstakingly restored. It’s a step back in time with all the details from lighting fixtures to furniture, woodwork and columns in original mint condition.

Inside, you can take a walk through gallery after gallery of interactive multimedia photos, maps, newsreels, and exhibits. You’ll see the tools of the trade including tommy guns, hand guns and explosives. You’ll read the newspaper headlines of the day that take you through our country’s initial love affair with the mob and their celebrity status, to their fall from favor with bloody gang wars. You’ll see how the G-Men began to replace the mobsters as the new folk heroes. All of this colorful history unfolds before you in the very courthouse where the war on organized crime began.

We were there to offer a toast to kick off EO Alchemy, the Entrepreneurs’ Organization’s 2014 western regional conference which was held in Las Vegas. As brand builders ourselves, we couldn’t help but appreciate how Las Vegas had turned its scars into stars with this important piece of American history.

So here we were, offering a toast 75 years later with what is now a legal alcohol beverage (champagne) in a courthouse in Las Vegas where several members of the mob were indicted. We were standing in front of where the judge and prosecutors stood and across from where members of the mob sat. We were very aware that this city is where the mob got their big start with illegal alcohol and used the profits to build up gambling in Las Vegas. What would we say?

We decided to tie it all together with Prohibition. Prohibition was an unpopular law in the United States and was ignored by the majority of Americans. The business was simply taken underground. The problem was that the blatant disrespect for Prohibition laws gave the mob an opportunity and “permission” to control and supply liquor. Each state had a different experience with the mob’s distribution and supply of illegal alcohol, and each state had a different interpretation of the detrimental effects of mob rule on alcohol production, distribution and sale.

When Prohibition was finally repealed by the 21st Amendment, the individual states were given the right to pass laws regarding how alcohol beverage was to be controlled in their own state. Interestingly, each state, in their own way, said, “never again” to those practices they saw in their own experience as monopolizing alcohol sales or “pushing” alcohol. Thus began a marble cake of state laws across the country.

Some states saw all the beverage alcohol outlets monopolized during Prohibition. They wanted to protect against this ever happening again. So these states, such as New York and Colorado, passed laws that said only one person could have one retail license. Others states said one person could have 3, such as Connecticut. Others, such as California and Nevada, allowed one entity to own multiple premises like supermarkets and big box store chains. And still others such as Pennsylvania, didn’t trust anyone and kept all alcohol beverage retail to themselves. They became “government control” states.

Some states felt that discounting for quantity might encourage overconsumption. So they passed laws against discounting altogether. So even if someone bought 1,200 cases, the case price would be the same regardless of the number of cases purchased. There are several such “case one” states.

… And the list of crazy-quilt laws goes on and on. So the legacy of America’s varied experience with the mob during Prohibition resulted, to a large extent, in our varied state-by-state alcohol beverage laws. Confusing as it may be, it’s the law. Cheers!