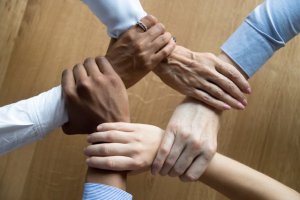 We have some friends and colleagues in business who say, “I don’t want to speak out because it will be seen as political and then my site will attract trolls.” But at some point it is in their business’s best interest to speak out. Now is one of those times!

The silence of a business is tacit consent for some top elected and administrative officials to encourage and give permission to an inhuman culture of hate and racism that results in great harm to others. We understand that business today wants to steer clear of “politics” but police violence against minorities is police violence against our customers, our suppliers, and our employees. It’s not politics anymore!

What if we thought of others as “our” people, not “those” people? When it comes to business, there can be little distinction between races, religions, or national origins. We rely on everybody in order to be successful ourselves. And we need for them to be respected, healthy and safe.

In fact, when we don’t speak out at a time like this where human rights have been obviously violated, we face worse than trolls. Now our vendors, employees, and customers want to know why they should continue doing business with us. Now, it’s in our own best interest to speak out! Our reputation is at stake! Our brand image is at stake. Would you buy a brand that remained silent while a member of your minority was killed on social media?

When we started Barefoot Wine, we were working with a vintner who hadn’t been paid for his grapes for three years. He happened to be gay. When we needed a National Sales Manager, we hired the best sales professional we could find. He happened to be gay. After a while, some folks would ask us if we were worried that Barefoot would be know as a “gay” wine. We said, “We’re worried that it won’t!”

We did not discriminate against who we would sell to, on the contrary, we supported the fundraisers for marginalized groups throughout the country. Why not? They were our customers, vendors, and employees. They were part of our “family” and part of our success.

And that’s how business has to position itself. Its weight is powerful and influential. But it’s not business as usual anymore. Now some folks who evidently don’t appreciate where their own paycheck is coming from are attacking our customers, our employees, and our vendors – while we sit in silence? We think not!

Everyone should be able to come to work or go out to shop without being profiled by a police officer who does not understand the person they are harassing may be someone else’s customer, employee, or service provider, let alone part of someone’s family! You can’t really favor any business that is not in favor of humanity! It’s ultimately that simple!

If you truly want to have less governmental interference in your business, you cannot allow the government to inhumanely treat the people you depend upon for your income. This is not a political issue. This is a humanitarian issue. They are messing with “our” people.

Discrimination is bad for business – PERIOD. It’s a shame that more business owners don’t see speaking out as a moral obligation, but if they find it difficult to speak from their hearts, they should at least practice good business principles.

We encourage all of you as business owners to speak out now to show the people we all depend upon that we stand with them and protest police violence against our people!