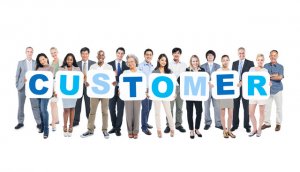 It used to be, just a few years ago, that companies didn’t want to take sides on what they saw as “political” issues. But basic rights, like the right to life, liberty, and the pursuit of happiness, have been documented as far back as the Declaration of Independence.

They are not political: They are “self- evident”! But when people started to demand and exercise these rights, however, something happened. They got politicized.

Then, guess what? They all came into your store, visited your site, and bought your services. They are all your customers.

Companies were in a quandary. If they took an official position on the basic rights, they could be identified with one party or the other.

“Not good for business,” they thought. “Don’t want to lose any customers,” they said. This corporate policy of staying neutral remained with us for over a century. After all, it was just a small minority of their customers who would complain if they didn’t “take sides,” companies reasoned.

But now there are so many customers who are demanding basic rights for all, that collectively, they represent a majority of the customers. What’s good business now? And are you conspicuous by your silence? Will your customers continue to trade with you if they know you are not supporting their demands for basic human rights? Not for much longer, we think. Sooner or later, your competition will show up for human rights and steal your customers! This is the new marketing reality.

Many companies are breaking their silence, even at the price of losing some customers who are basic rights deniers. Why? Because now it time to jump on the bandwagon before you get run over by it!

When we built the famous Barefoot Wine brand, we started with no customers. But we supported various human rights groups whether they were minority, environmental, or LGBTQ. Sure, we got some push back in the marketplace. Sure, we lost a few potential customers, but the stand we took, early and often, gained the support of these groups. In fact, those groups built the brand!

Today it’s not a choice about whether your company will stand up for basic human rights: It’s a requirement! We are evolving! It’s time to stand up or stand down!