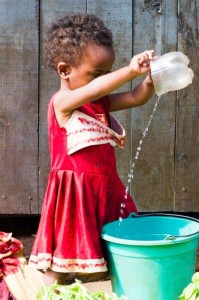 According to the World Health Organization, almost one billion people are without direct access to safe drinking water, resulting in hundreds of deaths per year. Competition for this limited but essential resource is increasingly resulting in violence around the globe.

In most places, the problem is not a complete lack of water but pollution of the available water by organisms and chemicals. What is the most efficient way to turn polluted water into clean water? Run it through the Slingshot. This is the brainchild of Dean Kamen, inventor of the Segway, the two-wheeled personal transporter that has become ubiquitous. Kamen is the founder of Deka Research and Development in New Hampshire, and is one of our personal entrepreneurship heroes. After developing many medical equipment innovations, he’s now changing the world.

For his latest innovation, he is committed to bringing low-cost clean drinking water to millions in the third world and beyond. He knew that the best way to clean polluted water was through the distillation process. But that process heretofore has resulted in huge energy consumption, limiting the potential value of the benefits. So he embarked on a creative process borrowing from his medical device background and came up with the Slingshot. This innovation is a low-energy distiller that can transform the most polluted water into clean drinking water.

The genius of the Slingshot is that it is portable and efficient, requiring much less energy than its predecessors. Like most distillers, dirty water is boiled and turned into steam that rises away from the pollutants and then condenses into clean water. But that’s where the similarity ends.

Kamen’s machine has a small pump that pipes in water from a polluted well or river and turns it to steam in a boiling chamber. The pollutants flow out of the chamber by a separate hose. Then the steam rises into a compressor which pressurizes it. The pressurization increases the vapor’s temperature and raises its boiling point. This allows it to condense back to water at a temperature higher than the standard boiling point. So now you have liquid water hotter than the boiling point. Then he runs the superheated water past the incoming flow of dirty water in a counter-flow heat exchanger. This cools the clean water and vaporizes the dirty water, starting the process over again.

The steam compressor takes considerably less energy than the conventional constant heat source currently used to heat dirty water. Now the water only has to be heated once and the process virtually self-perpetuates. Add solar panels and voilà! You have a portable, energy efficient, clean drinking water distiller! A single Slingshot can clean more than 250,000 liters of water per year, or enough to supply 300 people.

As a savvy entrepreneur, he realized the idea, as brilliant as it was, still needed distribution. So he set out to partner with Coca-Cola that already had the capabilities to distribute the Slingshots around the globe. Coke and its partners plan to place a total of 2000 Slingshots in Africa, Asia, and Latin America by the end of 2015.

Oh, and how did he come up with the name, “Slingshot?” Kamen terms the clean water challenge a “Goliath” of a problem. So he is the “David!”