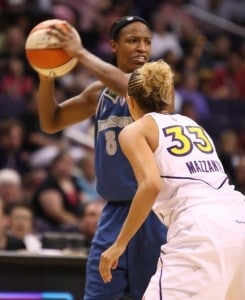 For us, it was no surprise that the Woman’s National Basketball Association (WNBA) finally decided that it was time to publically embrace the LGBT community. They were under mounting financial and popular pressure to do so. After all, they have to sell tickets.

In 2012 the WNBA commissioned a study that found that 25% of lesbians watch the games on television and 21% had attended a game. It became apparent that the WNBA had a very loyal fan base in the LGBT community that could no longer be publicly ignored. Added to that was the increasing frequency of players coming out and publicly identifying themselves as gay.

Brittney Griner, the #1 draft pick by the Phoenix Mercury in 2013, has publically identified herself as a lesbian. She says, “We’ll pave the way and show there’s nothing wrong with it. More sports need to do it.”

This new position is taking place against a legal landscape that has reached a tipping-point which has given the WNBA and other organizations permission to finally publically embrace the LGBT community. Case after case is being decided in favor of civil rights for the LGBT community. At this point, the federal courts have struck down laws in 19 states which attempted to reverse pre-existing state laws legalizing gay marriage. This federal action affects 43% of the total U.S. population.

The federal courts view gay marriage as a civil right, licensed by the state to legally combine property, and available to all citizens.  This recent legal change has accelerated public acceptance of the LGBT community. It encouraged many LGBT players to come out publically.

Pat Griffin, Professor Emeritus in Social Justice at the University of Massachusetts sums it up,

“For a long time they were happy to have those lesbians fill those seats in the stands, but not willing for a long time to embrace the fan base. What they’ve learned is that the fan doesn’t keep other people from going to games.” Rebecca Lobo, a six-season player and now a broadcaster, adds “It’s culturally more acceptable now than when it first started.” (The WNBA was founded in 1997.)

We hope that this official acknowledgment by the WNBA will influence other sports organizations to make similar moves to keep their brands relevant. We have found that the LGBT community is especially loyal to their supporters. And isn’t that exactly what these organizations want, loyal fans?

Embracing the LGBT Community by Hiring a Gay Manager

In 1991 when our brand was in its infancy, we hired one of the first openly gay winery reps to be Barefoot’s National Sales Manager simply because he was the best we found. His support for the LGBT community with our encouragement was at a time of broad-based homophobia. We were happy to get their business and publically acknowledged our appreciation and support for the community. Critics at the time said, “Aren’t you afraid that Barefoot Wine be known as the ‘gay wine brand’?” We said, “We’re afraid it won’t!” We needed all the support we could get. In fact, the loyalty of the LGBT community helped spread the word of our brand throughout the country.

So the way we see it, it’s just good business to acknowledge and appreciate your fan base. Change happens when we all realize that, at some level, we are dependent on each other for our livelihoods. Prejudice and homophobia actually hurt brands by discouraging support.  And isn’t it about time that we celebrate our diversity anyway? We say BRAVO! to the WNBA for leading the way in American national sports. And we look forward to seeing others follow their lead.