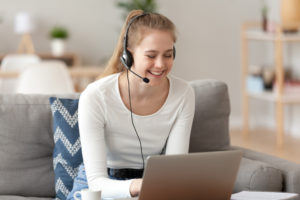 “We are hiring!” says Jeff Stevenson, who runs a wine marketing business called VinoPRO, Inc. that focuses on remote sales. “We literally had our single largest sales day of the year last Wednesday!” As reported in The Wall Street Journal by Jon Hilsenrath, contrary to most businesses, this one is expanding!

Our client Jeff Stevenson is fond of stating, “We have mastered the most ancient form of communication for the entire wine industry: the telephone!” And as a three-time consecutive winner as an INC 500|5000 fastest growing company in the United States, VinoPRO has done just that. Over the past twelve years his team has perfected and polished the software, hardware, hiring, training, and best practices for selling ultra-premium, fine wines using nothing but the telephone. He and his team have developed the most comprehensive, state-of-the-art premier outbound wine call center in the entire $33 billion dollar wine industry.

But VinoPRO is not just another wine broker – far from it. VinoPRO has positioned itself as an outsourced, direct-to-consumer (DTC) selling service for high-end wineries. His clients number among the top wineries in the nation and include brands such as Iron Horse Vineyards whose wines have been served at the White House for six consecutive Presidential Administrations, beginning with the historic Reagan-Gorbachev Summit Meetings ending the Cold War.With Benziger Family Winery, Dry Creek Vineyard, Merryvale Vineyards, Rodney Strong Vineyards, and dozens of other premier brands in Sonoma County and Napa Valley as well as Oregon, Washington, Texas and other AVAs, VinoPRO assigns a “Personal Wine Steward” to represent their winery client’s products to the folks who have visited the winery’s tasting room or joined their club. Over time, the VinoPRO stewards develop a personal relationship with the winery’s clients and forge a valuable bond that opens the door to continuous and ongoing sales.

As an example of their success, their DNC (do not call) rate is one-half of one percent.  That means that merely one out of two hundred people who answer a call from their favorite winery asks not to be called in the future.  Most folks want…no, crave to be called.  Only the State Lottery Winner hotline has better stats than that!

As impressive as all of that is, VinoPRO’s services are now in even higher demand. The tasting rooms have been suddenly shut down as people have been ordered to shelter at home. Folks are cut off socially and in need of personalized attention from someone they know and trust. One of those folks is their personal wine steward. They are reminded of the fun times they had in the wine country, the special winery they discovered, and now they are happy to have another opportunity to enjoy more of their favorite wines.

VinoPRO was also challenged with closing down its call centers when Sonoma County issued an order to shelter in place. So, true to entrepreneurial form, under Jeff’s leadership and his team’s quick response, they converted within 48 hours to a remote call center with stewards working 100% from home. They were all outfitted with USB headsets, webcams and access to all the systems needed to stay current, receive constant training and compliance monitoring, and secure orders.

Having the right solution at the right time, VinoPRO has been deluged by inquiries from wineries who want to save their DTC business through telephone sales.

But, if you think telephone sales is easy, think again. It requires skills, nuance, and respect for limitations that will surprise you. Jeff and his team are also helping wineries that want to go it alone by producing a series of free webinars (you can view them at http://www.vinopro.com) that instruct winery staff on when to call, what to say, and a myriad of other best practices. “We’ve sold close to $100,000,000 (one hundred million dollars) of wine over the past twelve years, all of it over the phone. We’ve pioneered this form of relationship selling” said Stevenson, Founder and CEO of VinoPRO.

Now more than ever people crave social interaction. And they want it in real time. A phone call from someone you know is much more welcome than all the emails and social media posts in the world. We may have to keep our social distance but we can still tell folks how important they are to us. We can bring some sunshine, fun, and fond memories to folks who are confined to their homes. And as Jeff reminds us, we can do it all over the telephone!