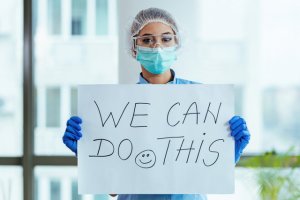 During the four years of WWII, our predecessors demonstrated a national and international resolve to overcome the enemy. The population was of a single mind. The leadership, direction, and exemplary messaging were consistent. Major sacrifices were made by everyone. People looked out for each other. Personal behavior was regimented along with supplies and resources. Sound familiar? Defeating Covid-19 is every bit of the challenge to life and economy that the war was.

During that war, our predecessors demonstrated a can-do attitude that can serve us well today. Here we are – beginning to open up again. Yet, we are still without adequate testing and tracking. We are still without a vaccine or even certainty that getting the virus once immunizes us. And even if it does, can we still carry it and infect others? There is still so much we don’t know. Basically, the second and third waves of the virus are a function of our behavior once we go out again.

Our elders today had parents and grandparents who lived during that tumultuous period of WWII. These undefeatable folks were branded “The Greatest Generation.” Why were they the greatest? Because they demonstrated through their empathy, sacrifice, and discipline what was necessary to defeat the enemy.

That conviction came in very dark days when it looked like we were going to lose the war. We lost most of our Pacific fleet in one attack. So much copper was being used for ammunition, pennies had to be made out of lead. Britain was being attacked and Europe had fallen. China was taken over and so was the South Pacific. Our military equipment was old and troops were unprepared.

But our country was mobilized.  “A slip of the lip can sink a ship!” the posters read, alluding to the dangers of talking to much. Others read, “We can do it!” appealing to the spirit of teamwork.

The generation that fought and won that war was right out of the depression when our economy was down for a decade! These were tough and determined people. We can learn from and apply the lessons their victory taught them.

Look out for each other. Wear a mask to prevent your exhaled droplets, potentially carrying the virus, from being inhaled by your fellow citizens. There’s no room for sloppiness here! Not wearing a mask says “I don’t care if I give you the virus!” How selfish and shortsighted. Like a boomerang, the virus you spread today can come back and hurt you and your family, and take your job away (again) tomorrow!

Sure it’s tough! Sure it’s invisible! But you can be sure, the enemy is there at your doorstep. Show the stuffing our predecessors had by demonstrating the discipline and sacrifice that are necessary to prevent second and third waves. Ration your supplies so there’s enough to go around, like the Greatest Generation did. Don’t horde supplies that everyone needs and create false shortages. We may be at this for a year or five years depending on our resolve, tenacity, and grasp of the big picture.

Don’t listen to propaganda that helps the enemy! Know when you are being conned into a shortsighted behavior that promises a short cut, but is contrary to our intel on the enemy. Of course we want to get back to “normal,” of course we want to open up businesses again, and of course we want to get on with our lives.  But we can’t let ourselves be manipulated by short-term players who will shirk responsibility when we get hit by a heavier wave because we let down our guard too early!

The Greatest Generation taught us that when everyone is mobilized in the same direction, practicing thoughtfulness, empathy, and determination, we can win! They did it for four years! We are wining after three months? America needs grit again!