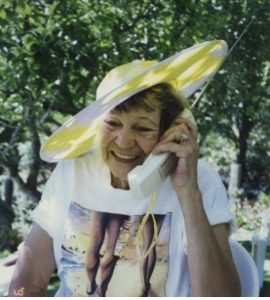 We read with delight yesterday that Barefoot Bubbly will be the Official Champagne for the Times Square, New Year’s Eve Ball Drop, viewed by 3 billion people worldwide. Barefoot Bubbly is the first American champagne in years to toast this very American celebration. And we are especially proud of the fact that it was originally named by Bonnie’s mother. Here is an excerpt from our New York Times Bestseller, The Barefoot Spirit, How Hardship, Hustle, and Heart Built America’s #1 Wine Brand, coauthored by Rick Kushman:

“If there was one person who embodied the Barefoot Spirit – the optimism, kindness, creativity, never-give-up attitude, and the cheerful, all-embracing heart – it was Bonnie’s mom, Mabel Hurd.

And if there was one human who naturally attracted like-minded, gentle-spirited souls, and who connected the people around her into one complimentary community, it was Mabel. She was a quiet force of nature, tall, high-shouldered and seemingly interested in everyone. People reflexively called her mom or grandma, without knowing that everyone else called her that, too.

Mabel had been a Rosie-the-Riveter welder during World War II, helping build liberty ships in the Portland shipyards. In late 1987, Mabel was living in Sandy, Oregon, in the foothills of Mt. Hood, growing and selling organic blueberries. She had also developed emphysema. That’s when Bonnie and Michael called her.

They told Mabel to come live with them in Sonoma County. It was just as green, the weather was so much kinder, and, besides, they said, they needed her help.

That was what Mabel needed to hear. She lived to be useful. In the near decade she lived with Bonnie and Michael in the farmhouse on MacMurray Ranch, she was everything from domestic help to office staff to, most of all, guardian of the sunny spirit.

Her health improved steadily in Sonoma County, and her emphysema became almost a non-issue after about a year or so. And if her move to dry weather and life with Bonnie and Michael saved her, she saved them, too.

One of the first things Mabel did was plant a 20-by-80-foot garden filled with vegetables and herbs. In the early 1990s, she began calling it Michael’s Sanity Garden, because Barefoot was spreading far beyond Northern California and, she said, if Michael was on the road throughout the West Coast trying to sell wine, “he should know good things were growing back home.” She also figured that, no matter what happened, the garden meant at least they’d have food.

Michael came back exhausted from a sales trip to Southern California in late 1993.  He told Mabel it was a disaster because the stores were stocking up for Christmas and New Years.

“That’s easy,” Mabel said. “Why don’t you have a Champagne?”

“I can barely sell wine,” Michael said. But he thought, you know, why don’t we? “What would I call it, anyway?”

It took a few years. Barefoot’s sparkling wine didn’t hit the market until 1997. A year later, Michael and Bonnie toasted Mabel for her 80th birthday with a champagne named Barefoot Bubbly.”

Thanks to the winemaking mastery of Jennifer Wall, Barefoot Bubbly became a reality and an American favorite! And her friend, Mabel Hurd, would be very proud to see the champagne she named become the toast of the town, heck, the toast of the planet!