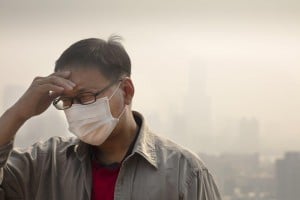 The Climate Conference in Paris will not produce a solution for global warming or carbon emissions because there are simply no teeth in the deal. It’s all voluntary and “self-enforced.” One important game changer has come out of the conference however – public awareness. Not just public awareness, but specifically, consumer awareness.

Our news feeds are filling up with daily graphic photos of people wearing masks under darkened skies in Chinese and Indian cities where you can’t see more than a block due to the air pollution. People in those countries are breathing deadly particulate matter exceeding 20 times the international health standards. Yet these are the very countries from which our inexpensive branded consumer products come.

We in the U.S. have exported our manufacturing to get cheap labor and cheap supplies, but in the process we have accelerated global warming, which is costing us far more than the perceived savings. Storms and droughts are becoming more intense and the cost of cleanup, repair and fire suppression are being paid for by your consumers. As these weather anomalies and extremes increase in frequency, consumers will start to think twice about how those “cheap” products are made and what the real costs are to our environment and the costs of our efforts to control these negative effects.

This shift in your consumer’s awareness is being accelerated by the daily news. It’s only a matter of time before brands touting low or no carbon footprints will have the edge in the market place. Even if the governments of the world fail to legislate some form of carbon tax, your consumers will be voting with their brand decisions. We already are, so let’s take a closer look at how we vote with our purchases.

The Paris conference has released indisputable data and graphics that show the main global polluters: the U.S., Europe, China, and India. European and U.S. branded products will be the first to seize upon what we see as a market opportunity, since they can more rapidly access cleaner energy sources for manufacturing. Imagine seeing products on the shelf that say. “Our brand does not contribute to global warming!” or “Manufactured with a zero carbon foot print!”

Seem far-fetched? We don’t think so. If global warming is the result of marketing “cheap” solutions that pollute the atmosphere, then it is marketing that will ultimately slow that trend. Nothing happens until you put a buck on it! So the branding question is, “How does your brand present itself in this new changing market where consumers want to make a difference with their purchases?” What is your message as a brand builder?

Playing it safe or playing it silent and hoping the consumers won’t notice how your products are made is rapidly becoming a losing strategy. The first brands to jump on this new opportunity to reduce their carbon footprint will gain the support of increasingly aware consumers over their competitors.  As a matter of survival, consumers will look for the brands that distinguish themselves from those that contribute to the economic burdens directly related to increasing super storms, droughts, and food prices.

The problems the world’s leaders are tackling in Paris were caused by commercialism and can be mitigated by commercialism. It’s much stronger than politics and can have a more lasting effect. As brand builders, we are always looking for “the next big thing.” Well, the next big thing is our own survival which is dependent on the survival of our planet itself! Why not align your brand on the side of survival? There’s an increasing market for it!