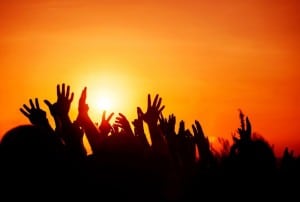 Last week the US Supreme Court upheld the right of same sex couples to marry. Just 20 years ago President Clinton signed a bill denying marriage to these same citizens. What has happened to change the minds of a nation? There were long and arduous legal battles in each state; we experienced a 20-year plus educational campaign including the explosion of the internet and social networking; there was an entire generational change at the polls; and the entertainment industry and the media helped to remove a great deal of the fear and ignorance that isolated and marginalized this vital community within our society. After all that, as the president said, “(We) evolved.”

All along that marginalized community had tremendous buying power. Why would any company not want to sell their products and services to all members of the buying public, no matter what their beliefs, orientation, or politics?

When we started Barefoot Wines, we set about building our brand by gaining loyal customers who were advocates for our brand. Before we entered the wine business we had a history of support for conservation and human rights. We grew up in the West and were mortified at the degradation of the environment and the marginalization of our friends who were in the LGBT community.

We’ve often heard, “Follow your passion.” But what we did was to follow our opportunity – passionately! Our opportunity presented itself as an uncollected debt owed to a grape grower friend. We successfully negotiated a trade for goods and services to settle the debt. In the process, however, we took on the debt and had to build a brand in order to convert the goods and services to cash to retire the debt.

But we didn’t give up on our passion. Instead we looked for ways and means to support the causes we identified with in the hopes that their members would support us. And they did!

In 1988 we supported one of the first gay business associations in the country. In 1990 we hired one of the first openly gay national sales managers. Turns out he was a fellow conservationist! By 1995 Barefoot was supporting LGBT causes from coast to coast. Critics would caution, “Aren’t you afraid that Barefoot will be known as the gay wine?” To which we retorted, “We’re afraid that it won’t!”

Together with our gay sales manager, Barefoot Wines sided with many LGBT community causes as well as conservation causes. At the time, the common wisdom was to keep your head down and wait to see if the controversial cause became mainstream before aligning your brand with it. We did just the opposite. We honestly believed we were on the right side of history and that our early and whole-hearted support would help bring about the change. At the time there were very few brands supporting these causes, likely because they were viewed as minority causes.

The fact is that times change. Your brand can sit on the sidelines and wait safely for the outcome before jumping on the band wagon, or you can throw in with the cause when they most need your support. This will earn their loyalty in the long run when they grow and gain more supporters. Any marginalized community remembers the brands that stood with them when they needed them most. Why not build your brand by taking sides?

Congratulations to the LGBT community for securing their civil right to marry under the constitution! Barefoot Wines was happy to support you when we began, and we are so grateful for your support in return.