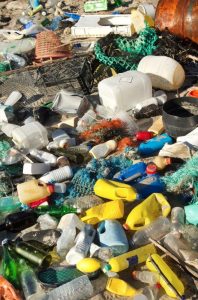 A Rohnert Park, California startup has an idea to solve one of the problems regarding single-use plastics. As you are aware, the oceans and landfills are choke with them. They take thousands of years to decompose. And when they do, they form tiny little particles that go through the food chain until we eat them ourselves.  Why not turn single use plastics into fuel?

According to the North (SF) Bay Business Journal, Resynergi has a proprietary process using microwaves that can convert one ton of certain common packaging plastics into 250 gallons of diesel fuel. And this diesel fuel is, in many ways, superior to commercially produced diesel fuel.

The company will produce compact portable units that fit in a 20-foot shipping container for about $350,000. Each unit can process up to 5 tons per day paying for themselves in 1.5 to 3 years, according to Brian Bauer, Resynergi CEO.

In the 1989 sci-fi movie “Back to the Future II”, the professor comes back from the future with Mr. Fusion, a modification to the famous time-traveling DeLorean. Mr. Fusion converts garbage and packaging materials into fuel. We loved that concept! And we love it even more now that someone has actually found a way to convert the potential power trapped in the waste materials into something valuable.

We like to say, “If you really want to save the Earth, put a buck on it!” Today, there is/was virtually no value in single-use plastics. According to the North Bay Business Journal, even though the U.S. produces more than 33 million tons of plastic waste every year, only 7% is recycled. Why? There’s no real “buck” on it. Resynergi hopes to change all that!

The American Chemical Council (ACC) lists potential customers for these plastic-to-oil conversion units as waste hauling companies, municipalities, non-profits, trucking firms, grocery stores, the military, and others. They say that if our plastic waste was converted to oil, it could be worth as much as $29 billion per year! They also say that the U.S. alone could support 600 plastic-to-oil facilities creating more than 38,000 jobs.

Bauer says, “Zero waste initiatives by many municipalities, and the fact that China is no longer taking the world’s plastic waste, means that we must find a better way to recycle and utilize this virtually untapped resource.” Ultimately, the banning of single-use non-biodegradable plastics is the solution in our view. And there is concern about continuing to burn any type of fossil fuel including diesel. But at least this solution puts a price on single-use plastic that winds up in the land fill and in our oceans.

Unfortunately, the only way that we will ever save ourselves from the detrimental effects of single-use plastics is to either replace them altogether with biodegradable packaging, or make them so valuable they won’t be discarded. In today’s world, Resynergi is a big step in the right direction.

After startup funding by angel groups to research and prove the concept, Resynergi is now ready to do a Series A round. This could be your chance to get in on something that can make you money while cleaning up our mountain of plastic waste.

We encourage every company producing products that are packaged in single-use plastics to find an alternative that is recyclable.  In addition, all of us consumers must consider the effects of our purchases to our health and the health of our environment. When we throw something away, where does it actually go? Now it is possible to make something useful out of our discards. We applaud you, Resynergi, and other companies who have found ways to improve our environment and make a profit at the same time!