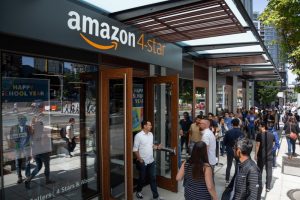 For years, we’ve been saying that the reports of the death of bricks and mortar retail stores was greatly exaggerated. Amazon 4 Star Stores are adding more weight to that argument.

It’s simple – stuff is heavy. And moving heavy stuff cost money! “But I thought shipping was free?” you might protest. But FedEx, UPS, DHL and the USPO employees are all still getting paid! Where does that money come from? It comes from you! You are paying for shipping, one way or another. This is not to say that Amazon and its suppliers are also eating part of these cost to get you to get your business in the first place. With “free shipping” they can at least appear to compete directly with bricks and mortar stores in the short run.

But sooner or later, the stuff you buy either has to be shipped to your door or you have to drive to a store, pick it up, and drive it home. The question is, what is the most efficient way to get stuff to you? How about if the retailer takes it to a store in your neighborhood and has you pick it up there? Well, that is the essence of the value proposition behind bricks and mortar. Packaging is reduced. Shipping is reduced. Handling is reduced. It’s simply more efficient!

In other words, having a store reduces the cost of shipping for the producer and the retailer. Now that Amazon is a giant and has forced many independents and smaller bricks and mortar retailers out of business, maybe it’s time for them to recover those costs and ask you to drive to get your groceries, and now, your other items as well.

There’s something else going on at bricks and mortar stores that Amazon is recognizing and that is the power of tactile contact. It’s one thing to print on your screen that the item you are looking at is rated 4 stars or higher by online buyers, but it quite another to have it physically there in your neighborhood! Now you can go see it, feel it, and compare it to other real products before you buy. You are much more likely to know what you are buying, and for Amazon it significantly reduces return shipping.

With 4 Star Stores, Amazon can now enjoy something hard to achieve online – the impulse, or notion, buy. The customer wasn’t looking for what they bought, but they stumbled upon it! And don’t forget the social and fun aspect of visiting a real store with other real people and real clerks there to help you.

Is retail starting to come full circle? Or did Amazon undersell bricks and mortar retailers just to take their storefront?