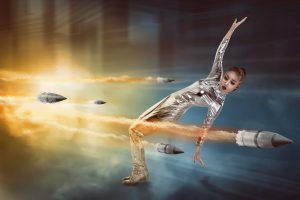 Our friends were surprised to see us still in business after two years. They knew we were undercapitalized. They would say sarcastically, “I didn’t know you knew you could dance!” alluding to all the fancy foot work it took to pay our bills. We responded, “We didn’t know they could shoot!”

We were dodging those $10,000 and $30,000 “bullets” every month. We had so little working capital, we had to wait until our buyers checks cleared before we could release our payables. It was that close!

What is working capital? Simply, it’s the money you have in any given month to pay your bills. Where does that money come from? It comes from people who are paying you for your goods and services, also known as your receivables. It also comes from cash you have in the bank and your inventory.

The working capital formula will show you how to calculate your working capital. Basically, it’s Net Working Capital equals Current Assets minus Current Liabilities. Current Liabilities include accounts payable, accrued expenses (like a one-time annual payment that you need to save up for every month), taxes, customer deposits (which are really not yours to spend), and other trade debt. If you have long term debt, your payments on that debt are also part of your monthly payables.

We were working on such tight margins that we had our accountant prepare what we called the “Cliff Report.” It showed us how far we could go before we fell off the financial cliff! Also known as a cash flow projection, it showed for many years we were never more than 30-60 days from bankruptcy. If we ever got 90 days away from the “cliff” we would celebrate. That’s because we had enough working capital to pay our bills for three months even if we went a month or two without sales!

Working capital is the key to survival for most businesses. You spend money and collect money. The question is, “How much of a cushion do I have?” And better yet, “How can I increase the size of my cushion?” We discovered several levers you can pull to help increase your working capital and the security of your business.

Everybody who sells you anything is a vendor. The terms they give you to pay your bill are critical. Ideally, you want 90-180 days with no interest and they sell you at the quantity discount but warehouse your goods until you need them.

This may sound like a fantasy, but somewhere between all-cash on delivery (COD) and this ideal situation lies your credibility with them. Do you have a history of paying your bills on time? Do you call them in advance when you can’t make a payment and deliver a plan to bring your account current within 60 days? Do you share your expansion plans with them and demonstrate how your success will result in you purchasing more of their products? Are you willing to enter into a long-term contract to give them the security they need to help you build your business without the fear of you leaving them later?

If you do these things, they are more likely to extend your credit limits and your terms. They may also include special discounts and inventory privileges. All of this will help your cash flow immensely. Without it, you will have to borrow money to pay your bills and face heavy interest rates.

Often the hardest part of paying your bills on time is collecting the money that is owed you. If you’re working on tight margins like we were, if they are late, you are late! That’s why the ideal situation is to sell for cash. That way you’ll have the cash to pay your bills before they’re due.

This also may seem like fantasy. But we found the customers who buy in volume are open to discounts for cash. Everybody wants the lowest possible price for your goods. Give them a lowest price when they pay cash!

Establish a good working relationship with a commercial bank. One way is to borrow on short-term (like 90 days) and pay off the note on time. Then do it again and again, increasing the amount. This will demonstrate your credit with the bank.

Now, apply for a line of credit. Basically you give the bank ownership of some of your current assets as collateral. Depending on the bank and the times, they will typically give you the highest percentage of collateral value on your accounts receivable. They will also typically give you a lower percentage on your sales-ready inventory, and even a lower percentage on the value of your raw materials. Some banks will require an additional means of payment such as a personal note, lean or second mortgage.

Based on the value they place on those assets they will advance you cash. Ideally, you want a zero sweep account where you’re only paying interest on the funds you need and for the time that you are using them. You and the bank set up an account into which your accounts receivable are deposited and the bank takes its money out first. This is another great way to improve your working capital.

As mentioned earlier, the biggest threat to your cash flow is deadbeats and late pays. These folks owe you money but are hard to collect from. We found a way to mitigate this problem with how we stated our terms on our invoices.

We originally said our invoices were due in 30 days and would bear an interest rate of 2% if they went over. That was hard to enforce, especially with large customers we depended upon. Plus some late payers would just ignore the “fine.”

So we discovered a way to give them an incentive to pay on time. We invoiced them for an artificially increased price but then offered a discount if funds were received within 30 days. Interestingly, most buyers would say they would pay on time and set their prices on our goods accordingly. They believed their own verbal commitment. After a few times paying the higher rate based on past dues, they quickly fell in line and made our invoice a priority.

Cash Flow Management, along with Personnel Management and Distribution Management, is one of the three essential skill sets for most forms of entrepreneurship. But it is especially critical to the CPG business. The goal of cash flow management is to reduce your need for capital.

One way to reduce your need for working capital is just-in-time production. This requires working very closely with your suppliers and other vendors to reduce your inventory. It also requires a sober analysis of your sales projections. Try not to be sitting on unsold inventory that you have to pay for.

Another way is just plain juggling. Make careful note of exactly when your payables are due. Don’t pay them early and don’t pay them late. This is really an art form that when perfected, can increase your working capital.

Somewhere between your accounts receivable and your accounts payable is your working capital. If you run out of working capital, you can’t pay your bills (The Cliff). Selling off your assets to raise capital puts you in a loss spiral. So the best approach is to do all you can to reduce your need for capital in the first place. Learn how to dance!