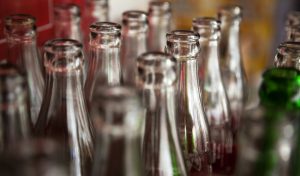 When Michael was a boy, his first job was a courtesy clerk for the local Safeway supermarket. One of his duties was sorting pop bottles. In those days plastic was relatively new and was not yet widely used in packaging. Soft drink manufacturers had to use glass to package their branded products.

The glass was so expensive they offered a substantial redemption value to get consumers to return the empties. Every store had a “Bottle Room” which is where those returned glass bottles would end up. The bottle room was a mess because bottles were everywhere, brands were mixed, and the cardboard six-pack cartons they were sold in were usually filled with an assortment of different brands.

Michael would spend an entire day in one of these bottle rooms. His job was to clean up the mess, organize the bottles, sort them out by brands, and put them in the proper six-pack cartons. You see, in those days, soft drink producers were actually cleaning the glass and reusing it. This included all the popular soft drink brands of the time.

Shortly after that, a new trend began, “disposable packaging”, which made it “easier” for the customer. The customer no longer had to save their empty bottles and return them. Now they were “disposable.” Just throw them away was the mantra of the day. It was a call to inaction that pandered to our human laziness.

Some glass products still had redemption values, but these were imposed by state governments and the glass no longer needed to be sorted because it could just be melted down and reused, a testament to increasingly cheap energy. They certainly wouldn’t need Michael anymore to sort all those bottles. 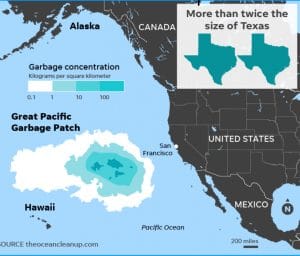 But then came plastics! And everything became disposable. So, it got disposed of, in the landfills, in the waterways, and in the oceans. The Pacific gyre is an island of floating plastic marine debris that is twice the size of Texas …and growing. The plastic breaks down under ultraviolet light into microscopic dust which is eaten by fish at the bottom of the food chain. Guess who’s at the top of the food chain? We are!

So now, we are walking around with microscopic traces of plastic in our liver and kidneys. The Surfrider Foundation says, “You don’t throw plastic away, there is no ‘away.’ You just throw it around!” They also say, “Every bit plastic that was ever made is still with us!”

Seth Borenstein of AP News writes on July 19th, 2017, “The Plastics Industry has made more than 9.1 billion tons of plastic since 1950 and there’s enough left over to bury Manhattan under more than two miles of trash, according to a new cradle-to-grave global study.”

According to the research reported in the journal Science Advances “Plastics don’t break down like other man-made materials, so three-quarters of the stuff ends up as waste in landfills, littered on land and floating in oceans, lakes and rivers.” “At the current rate, we are really heading toward a plastic planet,” says Roland Geyer, an industrial ecologist at the University of California, Santa Barbara. “It is something we need to pay attention to.”

Seth goes on to point out that a recent study co, co-author Jenna Jambeck of the University of Georgia that calculated “of the 9.1 billion tons ever made, nearly 7 billion tons are no longer used. Only 9 percent got recycled and another 12 percent was incinerated, leaving 5.5 billion tons of plastic waste on land and in water.”

Basically, there’s no debate about whether or not consuming plastic is good for you. This debate is over who is responsible and who should pay for the cleanup, health, and environmental consequences.

According to Steve Russell, vice president of plastics for the American Chemistry Council (a plastics manufacturers association), “Plastics are used because they are efficient, they are cost effective and they do their jobs,” and, he adds, “If we didn’t have them, the impact on the environment would be worse.” This, of course, assumes that there are no alternatives nor will there ever be.

Problems get solved, as we like to say, “When somebody puts a buck on it.” This is obviously not a problem that will be solved overnight but there are some economic advantages not presenting themselves that will definitely put a buck on it. Just like Michael’s first job sorting recycled bottles in the bottle room was facilitated by the economic advantage of recycling glass bottles to the manufacturers, and just like state-mandated redemption values have forced recycling of many soft drink glass bottles today, there has to be an economic advantage to solving the plastics packaging problem. 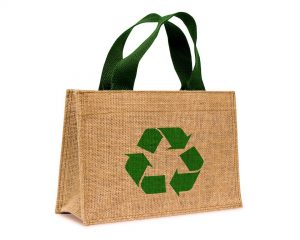 Plastic grocery bags have been banned in many states and countries. Suddenly, everybody’s trunk is filled with fabric bags made of recycled plastic and other materials that were not in circulation just 10 years ago. Was it the plastic bag ban that forced this behavioral change on the part of the consumer? How about having to pay extra for paper bags if you forgot your fabric one? Did that have an influence on this sea change? We think so. These are economic impacts, unfortunately not necessarily conscientious choices.

According to Roland Geyer, “35 percent of the plastic made is for packaging, like water bottles.” What happens when the true cost of water bottles is passed on to the consumer? Will we see recyclables and consumer-owned containers increase in demand? Certainly! And with this comes huge opportunities for new packaging concepts. But as long as the costs to health and the environment are “free” to the producers of single-use plastics, there’s no demand.

As much as we abhor additional regulations on business, these regulations actually increase opportunities for new businesses whose solutions address this increasingly costly problem. We believe that it is only good business to protect the health and welfare of your customer.

The Pacific gyre is not going away, and the research studies on plastic as a health hazard are on the increase. So, when it comes to packaging materials, there is already mounting pressure on companies to look for alternatives to plastics.

Sooner rather than later, the real cost of delivering a consumer product in a plastic package will be brought to bear on the producers and/or consumers. With the increase in consumer education, consumer brand builders who choose alternative packaging, or easily recycled plastic packaging, will have the advantage in the marketplace. Whether it’s the government, the general public, or your consumer, the pressure is on producers to solve this problem now!

There are many examples of product producers who have already seized upon this growing opportunity and attacked this problem from different angles. Resynergi, in Sonoma County California, has a way of making diesel fuel from waste plastic. Fibers like olefin made of recycled plastics are appearing more often in our clothing. And who doesn’t have a fleece blanket or fleece jacket? But the big change will come when there’s a “buck” on it.

Think those days are a long way off? Seth Borenstein quotes Geyer, Jambeck and Kara Lavender Law who found out using the plastics industry’s own data, that the amount of plastics made and thrown out is accelerating. In 2015, the world created 448 million tons of plastic — more than twice as much as made in 1998. This means that the exploding use of plastic packaging will create a serious political issue by 2020. The question will be, “Where do you stand on plastic packaging?”

So, for a number of economic reasons, the times are right for innovative and safe packaging and the institution of new consumer behavioral systems. When young people ask us, “What business should I go into?” we always say, “Find an increasing need, and develop a solution.” In the famous movie, The Graduate, when the graduate asked Mrs. Robinson’s husband the same question he said, “One word: Plastics!” It’s ironic that 50 years later, it’s two words: “Plastic Alternatives!” 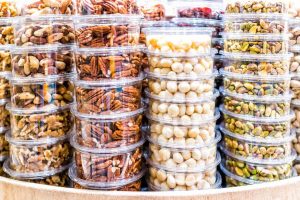 The June 2018 National Geographic focuses on the global runaway plastic packaging. They say more than 40% of all plastic waste is used once and then tossed with over 9 million tons ending up in the ocean each year. They also say that only 18% of plastic is recycled. The “working life” of a plastic bag is only 15 minutes. Plastic bags take up to 1000 years to decompose. That is 35,040,000 times its useful life.

One of the interesting problems they point out, and certainly an opportunity for entrepreneurs, is simply collecting the plastics in Third World countries where they lack garbage trucks and disposal facilities.

When we were in Honduras several years back, for instance, we couldn’t believe how polluted the streams were in this otherwise beautiful tropical paradise. We wound up asking the locals how they expected to attract tourist dollars with all that plastic in their streams. Their response startled us. “We always throw our packaging materials in the stream,” they said. “It’s just that you guys went from biodegradable packaging like paper, cardboard, and wood, to almost exclusively plastic.”

The idea that we are going to make consumers behave differently is a good one, but history has shown it is fraught with problems. But it is certainly not as practical as starting at the source by delivering our products in biodegradable packaging. We are advisors to CPG brand builders, and as such, think it would be irresponsible on our part to promote branding techniques and practices without addressing the biggest mega-trend effecting the CPG space in the immediate future.

As you know from our articles, we put a lot of stock on brand image. Brand image includes your packaging, and more specifically, your choice of packaging materials.

We also believe that a big part of your brand image is what your customers think about you! What do you stand for? If your choice of packaging material says, “I take no responsibility for the downstream consequences of my packaging,” or if your choice of packaging materials says, “I don’t care about your health or welfare,” then you are hurting your brand image.

But if you are among the first to support biodegradable packaging materials, if you take the lead in alternative packaging, you will send a message that will only get stronger as time goes by. And you will ultimately have the economic advantage over brand builders who have to pay for the consequences of their packaging decisions. We strongly advise that you see that steamroller coming your way and step aside.

As a packaged goods brand builder, don’t be confused or distracted by the endless stream of front-page drama. The story back on page 8 about the growing Pacific plastic waste gyre is the one that will make the biggest difference in the future of your brand! What decision will you make? What stand will you take? 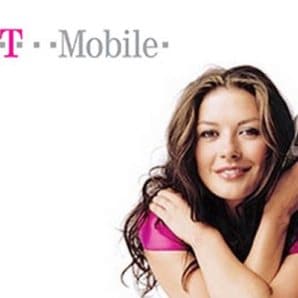