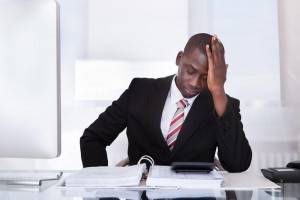 When sales drop off, it’s easy to simply blame the sales division. We often hear, “They’re just not doing their job!” But is it really the sales division, or is it something we generally take as an unchangeable constant, like the very structure of the company itself?

Most companies are organized based on a strict division of labor. Everyone is in their silo with folks who have similar skill sets. The CEO makes the decisions and the troops execute them. If the company is selling a product, the production people set the parameters for the quality and price. Then the marketing people develop a plan to communicate the features and benefits to the consumers – complete with packaging, signage, theme, positioning, and programming. The process is – the production people tell the sales team what to sell and the marketing people tell them how to sell it. This is the classic company pyramid structure where the flow of information and command is top-down.

Typically in this scenario, the first people to get laid off when sales are bad are the salespeople – the very people who can do something about it. As we have said many times before, the problem with the top-down soloed approach is that it restricts the flow of customer feedback. In fact it can actually block that flow for status and job security reasons, albeit short term, much to the detriment of the company itself – and the customer! And that’s wherein the potential problem lies.

Instead of truly putting the customer on top, pyramid structured companies inadvertently put the customer on the bottom. They do this by relegating salespeople to selling a product developed by production using a marketing plan developed by marketing. This puts the only two groups in the company that actually talk to the customer everyday on the lowest level of the pyramid totem pole.

When sales are hurting, rather than blame the salespeople, take a close look at the systemic approach to the company’s structure; that may actually be the culprit.

Many new companies take direction from the sales and customer service people in order to stay current and relevant. They must in order to satisfy the customer, or they go out of business. But then, as they get more established, develop more products, and expand their territory, something happens. The division of labor takes over, ostensibly for efficiencies of scale. Now the silos start to appear and the turf wars begin. Information begins to be treated as a currency rather than the life blood of the company. Job security and protection of status begin to take precedence over customer feedback.

We have worked with companies whose sales and customer service people want to know how they could relay the customers’ complaints and desires to production and marketing departments without “offending” them.

We have worked for other companies whose salespeople told us reasons why their products weren’t selling but they didn’t want to be seen as “picking on” the marketing and production people – so they kept it to themselves. The structure in those companies had been entrenched for decades and the culture was based on a status that put customer service and sales on the bottom.

Get over yourselves! By making the best interest of the company a priority, the customers naturally are on top where they belong. Let the flow of feedback be the only status factor in your company. As we often say, “Pyramids are for dead pharaohs!” Don’t put your salespeople under one!